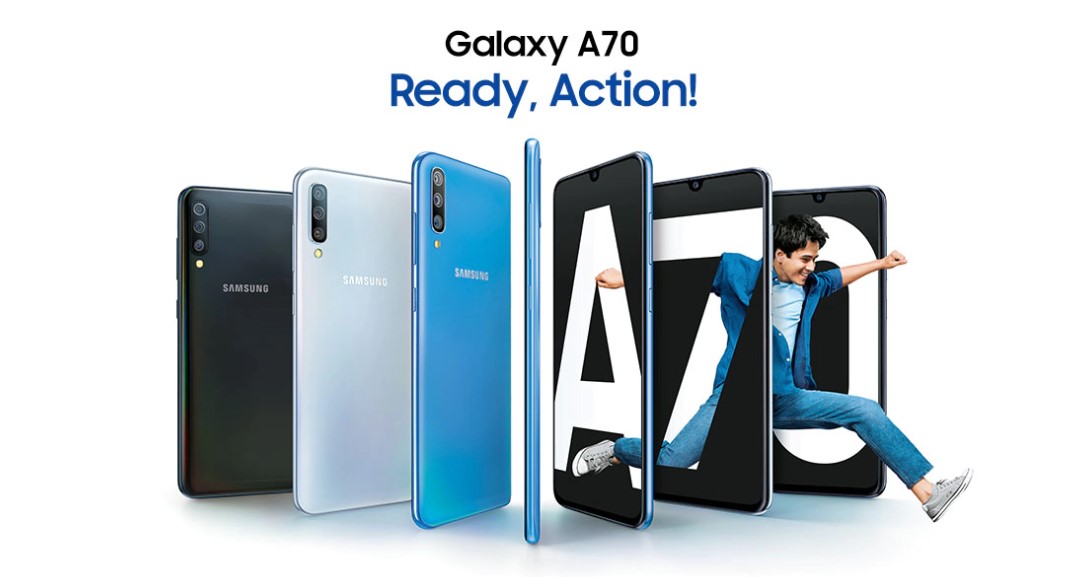 Perhaps Samsung is the only smartphone maker who doesn’t stop releasing smartphones one after another. Since January, we’ve seen that Samsung released numerous smartphones in S, M, and A series with the gorgeous entrant being Samsung Galaxy A70 in Australia. Samsung Galaxy A70 Review – The A70 is designed for those who want to have a big screen and excellent battery life. Samsung pointed out that the refreshed A & M series is aimed towards a millennial audience and that the A70 is especially well-suited to individuals who spend a lot of time browsing social media or looking at a video on their phones.

The real and unique feature of Galaxy A70 is the smooth experience and degree of refinement it offers to the audience. Moreover, Samsung Pay support also a standout differentiator – but chances are it’ll not be the system seller than Samsung hopes it is. Aside from everything, is it good enough with amazing features and does it have with it takes to beat the flagship devices of Xiaomi and Vivo? Read on to find out!

The “Plastic Shell” outback is the weakest element of Samsung Galaxy A70. It seems like glass, but when you hold the handset, the illusion will be shattered. This is a little disappointing as the cost of the Galaxy A70 is more than enough to allow us to expect true glass or a metal backside. But the corners must obviously be cut somewhere. However, it’s not as that bad because there is a high screen-to-body ratio which means you can handle your phone more efficiently and easier than you can expect – but it likely still needs to be operated with both hands at 164.3 x 76.7 x 7.9 dimensions. Be noted that it doesn’t come with a water resistance rating but it’s not really surprising as far as the price is concerned. 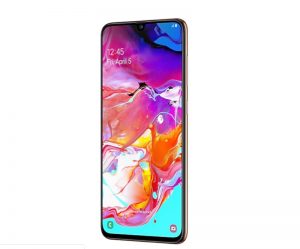 The impressive 6.7-inches Super AMOLED display is covering almost all the front of the smartphone. It’s not only the biggest screen but exceptionally sharp thanks to the maximum resolution of 1080 x 2400 pixels at 393 PPI. The smartphone also has an overall 20:9 aspect ratio and a high screen-to-body ratio of approx. 86%. It’s just because of a waterdrop-like notch and hardly any bezel. Undoubtedly, it’s a gorgeous configuration. The colours aren’t as punchy as Huawei P30 Pro and iPhone XS but it’s a great option for those running short on budget.

On paper, Samsung Galaxy A70 is equipped with three sensational camera lenses on the back which is not rare now as many smartphones are available with the same number of cameras. It has 32MP main camera sensor which is partnered with 8MP ultra-wide one and 5MP depth sensor. Performance-wise, all snappers are solid and capture colourful images with a lot of details without compromising on image quality. 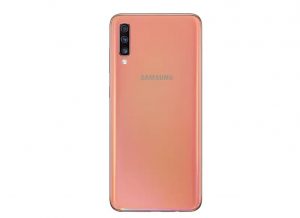 At 123 degrees, the 8MP ultra-wide lens can still be very well integrated into the frame, whilst the depth sensor allows the shooting to adjust field depth, which for portrait photography is particularly convenient. This can have difficulty during low-light as with most budget cameras, but in light scenes, you can capture detailed images, without a doubt. Importantly, you can install Scene Optimizer which detects what you shoot and thus optimize the settings.

The front-facing camera, on the contrary, is just a single-lens one. However, it’s amazingly high with 32MP. It means one can capture selfies with full of details but it’s not as amazing as you can get from the rear cameras.

Digging down inside the beast, Samsung Galaxy A70 is loaded with Qualcomm Snapdragon 675 Chipset – paired with a whopping 6GB/8GB of RAM and 128GB of onboard memory. Not enough? Well, you can take the storage to the next level (up to 512GB) via microSD card. Though it’s not as fast and smooth as Galaxy Note devices or smartphones of S-series but there is enough muscle for smooth and silky performance and that justifies the price.

Moreover, day-to-day use is also smooth and it manages to handle graphics-enriched games like PUBG Mobile and Asphalt 9: Legends without showing a sign of lag. Besides, some online sources have claimed that it’s better at heat dissipation as compared to Note 7 Pro.

You wouldn’t be disappointed on the battery front as it’s powered by a gigantic 4500mAh non-removable battery which, of course, gives a lot of life to the phone. The casual user might get two days out of it whereas heavy users will also stay online all day long even with 20% juice left in the tank before going to bed. It’s supported by super-fast 2W charging that restores the juice from 0% to 100% in less than two hours.

The official release date of the Samsung Galaxy A70 was somewhere back in April 2019. It’s, obviously, available via Samsung’s official website as well as all Australian stores. This handset seems to give a tough competition to the likes Vivo V15 Pro, Pocophone F1 as well as Nokia 8.1 as it set users back in between AU$450-599 – depends on the retailer or store you choose to buy from. A list of numerous Australian stores is available at Paylessdeal.com.au to compare its rates and buy one at unmatched rates without paying extra bucks.


The Samsung Galaxy A70 is indeed a great smartphone you can get your hands on. Perhaps it’s not the super-powerful smartphone – but you get an amazing blend of usability and a definite degree of polish that other smartphones don’t have. This is the smartphone that doesn’t show a sign of lag even with heavy usage and a large 4500mAh battery lasts well over a day of use. The biggest screen, on the other hand, makes it ideal to watch movies and play 3D games. That’s what we know about the Galaxy A70. What are your thoughts? Is it a good balance between value and performance? Let us know down in a comment section.

This website uses cookies to improve your experience while you navigate through the website. Out of these cookies, the cookies that are categorized as necessary are stored on your browser as they are as essential for the working of basic functionalities of the website. We also use third-party cookies that help us analyze and understand how you use this website. These cookies will be stored in your browser only with your consent. You also have the option to opt-out of t