Top tips for creating a unique video ad for...

In order to enhance educational outcomes and boost school...

10 Things All Business Owners Need For A Startup Making...

Owning an SUV has been the rage in the global market for the last couple of years. But since the popularity for the Sports Utility Vehicles has been on an all-time high in these years, it is no longer good enough to drive just any SUV. So, how do I stand out from the crowd? Well, BMW has the answer, and it’s an SUV that definitely stands out in the masses.

You see, in a desire to stand out from the crowd, the obsession of being different has virtually seeped into all aspects of our lives. But more importantly, it’s extremely dependent in the choice of our automobiles. The BMW X6 was the Bavarian automaker’s take on this, an SUV that confidently blends the best of a coupe and an SUV, just like a GT sedan.

But then again, it seemed a tad big and out of reach for the mainstream buyer. Now, BMW has launched the smaller X6, the X4. As an amalgamation of an SUV and a coupe, this German machine oozes style and panache. We got our hands on one, and here’s our BMW X4 review. 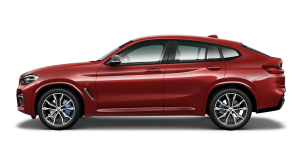 With the first-generation X6, BMW tapped into a new market with a Coupe-over design in 2008. For what it’s worth, the designers at BMW saw this trend coming before anyone else in the automotive world. Despite an unconventional design, oddball looks and a generic face, the X6 proved to be an instant success in the global markets, and interestingly, it was quite popular in India as well. As a result, the coupe-over BMW managed to create a sub-segment in the luxury space, as the company likes to call it the Sports Activity Coupe (SAC).

Following the trend, BMW has pinned the market with another one of its luxury SACs, the smaller X4. Interestingly, the X4 has quite an imposing design, as in comparison to its bigger sibling. At the front, the X4 boasts a rather-large kidney grille, large air damps in the bumper and BMW-generic LED headlamps. In profile, the 19-inch alloy wheels – though they look absolutely bonkers – look quite small against the colossal size of the X4, a strong shoulder line dominates the profile and then there’s the sloping roofline that gives the X4 a distinctive character and strong road presence.

At the rear, the wide rear haunches and the steeply raked windscreen make a return, what’s also interesting is the neatly tucked spoiler in the back and the elegant LED tail lamps that remind you that this is a new age BMW. In fact, you simply cannot mistake the X4 on the road for something else, that’s how distinctive the design is. As we came to love the striking design of the car in our BMW X4 review, my only grouse had to be the smaller wheels. But then again, 20 or 21-inch wheels are simply too large for our road conditions. 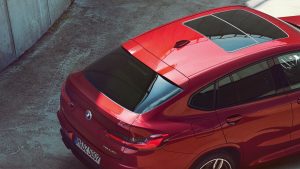 The cabin – in typical BMW fashion – oozes dollops of luxury and style. In fact, the cabin looks simply fantastic thanks to the all-black theme of the dashboard. Pair that with contrast red-stitching and it looks absolutely dapper. That said, the general fit-and-finish is great and the quality of the leather is simply astounding.

A special mention goes to the fantastic iDrive system, which is by far the most intuitive and finest multimedia experience amongst all the luxury cars. The menus are intuitive, the metallic rotary controller makes it a boon to operate in traffic and the addition of gesture control – seems gimmicky – is actually a nice touch. After all, all you have to do to increase or decrease the volume is twirl your finger in a clockwise or anticlockwise direction. Another place where BMW deserves a special mention is the seats. The sporty seats in the X4 are extremely supportive, and the plentiful side bolstering holds you in place in case you want to figure out what body roll is all about.

While the X4 comes with an option of gasoline and an oil-burner, our test car was the xDrive 30i in M-Sport X trim. It gets four-cylinders and displacement of two litres. The Twin-Power turbocharged petrol motor is capable of churning out 248bhp and 350Nm of peak torque. At 248bhp, the power sounds a little conservative for the mammoth-sized X4, but as you as you step on to the throttle, you are rewarded with a nice surge of power almost throughout the rev range. Combine that with the ZF eight-speed automatic – the finest production-spec gearbox in the world – and you have a drivetrain that simply excels.

The throttle response is immediate and the gearbox pushes you in the right gear every time you step on the gas. That simply means the X4 is a hoot to drive, and it’s also evident when you counter in that it only takes a mere 6.3 seconds to sprint from 0-100km/h from standstill. As far as handling is concerned, I am not quite impressed with the steering wheel. While the response is direct, it never really tells you what’s happening between the road and the tyres. In fact, the steering is unnecessarily hefty and it only gains more heft when you put it in the Sport mode. The ride quality is sporty and the X4 stays glued to the roads even at higher speeds. As a result, the sporty handling results in a stiffer ride and therefore, you experience the occasional thuds. 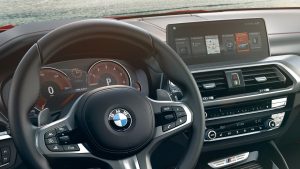 Worth that hefty tag?

As I said in the beginning, if you are someone who wants to make a statement and stand out from the crowd, the X4 is your best bet. And to be completely honest, it’s only the design and the blue-and-white propeller logo that makes a case for this SUV. From a practical perspective, the X4 offers an uncomfortable ride and lackluster steering. And then again, it demands a strong premium over the conventional X3. So, if it was for me to decide, I would opt for the X3 with my eyes closed. But if you’re looking to turn some heads, the X4 is the one for you. To read our extensive BMW X4 review, be sure to tune in to autoX.

Sarah Cantley - May 18, 2022 0
Top tips for creating a unique video ad for business Every business owner should have a fundamental understanding of making an effective advertisement. Customers keep...

Three reasons why the rise of Multi Academy Trusts is good for your sales...

Sarah Cantley - May 17, 2022 0
In order to enhance educational outcomes and boost school improvement in the UK, the government is encouraging more academies to join Multi Academy trusts...

Sarah Cantley - May 17, 2022 0
10 Things All Business Owners Need For A Startup Making the decision to start your own company can be pretty daunting. After all, there is...

Top 10 Tips to Get Your Business Finances Organized

Sarah Cantley - May 16, 2022 0
If you're like most business owners, your finances are probably a mess. You've got invoices piling up, bills to pay, and no idea where...